Hi Everyone, Today we would like to introduce Elka Ray – the author of the newly-released (August 2011) book Hanoi Jane. Elka is a Canadian writer and illustrator who lives in Ho Chi Minh City, Vietnam. She is the author of one novel and three children’s books.

Expat Women: Elka, what took you to Vietnam originally?

Elka: I spent six months backpacking in South East Asia after high school and found the region fascinating. Following university, I came to Vietnam in 1995, planning to find a thesis topic for higher studies. Instead, I started writing freelance, fell in love and never went back to university.

Expat Women: You have now been in Vietnam for 16 years. What made you stay? And what can you tell us about the other expats you have seen ‘come and go’ in Vietnam? 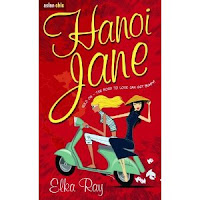 Elka: Alot of the expats who came to Vietnam in the mid-to-late-1990s and are either still here, or return regularly. Having been closed to Western investment for so long, Vietnam was a strange and exhilarating place in those days. (I have consequently met everyone from retired Vietnamese colonels to Miss Vietnams to entrepreneurs with crazy get-rich-quick schemes.)

I stayed because it was exciting, I had interesting friends, and I could work part-time as a magazine editor and pursue my true passion – writing fiction. Since my husband’s family business is based here, I do not think that we will be moving any time soon. Although I do want my kids to spend their summers where I grew up, on Canada’s Vancouver Island.

Expat Women: Your first novel, Hanoi Jane, was published by Marshall Cavendish last year. What does it take to succeed as a writer?

Elka: I am still working on that one! I meet a lot of people who tell me, “Oh, I want to write a book!” but they do not sit down and do it. If you truly want to write, you will find some way to do daily. If you are really talented and lucky, your first book might get published – but that is unlikely. It is more probable that you will have to write for years without praise or financial reward before you have learned your craft and someone gives you a break. If and when you do find a publisher, you have to put in the time and effort to market your work. You need a great imagination, empathy to be able to create emotionally complex characters, discipline, and the ability to keep writing despite countless rejections.

Expat Women: Do you have any advice for other aspiring fiction writers?

Elka: I think that no matter what, you should write what moves you. However, if you want to get published by a traditional publisher (as opposed to self-publishing), you have to remember that their main concern is to make a profit. It is not enough to write a “good” book. It has to be sell able, so research the market.

If publication is your goal, before you start, I would advise you to write the promotional blurb that would go on your book’s back cover. Publishers want straightforward stories that can be summed up in a few lines. They want one clear, consistent point of view, and a lead character to whom readers can relate. The toughest market segment at the moment is that of kids’ picture books, especially rhyming ones. That being said, I have just finished a funny rhyming kids’ manuscript called Princess Nelly Was Smelly, for which I have high hopes. In the end I think that you just have to write what you love, and hope that some key editor will also love it.

Expat Women: Hanoi Jane tells the story of a young American reporter who, after moving to Vietnam and being dumped by her fiance, embarks on a wild adventure to rebuild her life. Was this story was based on your personal experiences?

Elka: The plot, which has Jane investigating a charity fraud, getting arrested by the secret police, and busting a gem smuggling ring, is absolute fiction. The characters are also inventions. The “real” elements in the story are the setting of northern Vietnam, which I know very well, and the emotions experienced by Jane — homesickness, confusion, doubt, heartbreak and ultimately a sense of pride that she is able to stick it out and find happiness in a place that was totally alien to her. I think that all expats have these feelings, which is why the book has resonated so well with them.

Expat Women: Elka, thank you very much for sharing your insights and experiences. We wish you and Hanoi Jane nothing but success this year. Congrats!