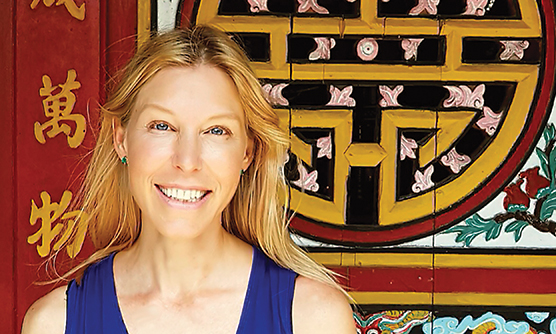 When did you first come to Vietnam? What brought you here?

After high school I spent six months backpacking around Southeast Asia and loved it so much that, along with journalism, I studied Asian Studies back home in Canada. I moved to Vietnam on New Year’s Eve 1994 “for one year”.

What were you doing in Vietnam prior to writing creative fiction?

When did you move to Hoi An? Why Hoi An?

My family moved to Hoi An the summer before last. We wanted to live near the beach. After nine years in Hanoi and 11 in Ho Chi Minh City, we craved cleaner air, more natural surroundings and a place where our kids could run around.

Hanoi Jane was your first novel — published in 2011. What were you trying to depict in the novel? How successful has it been?

Hanoi Jane is a light, funny romantic mystery about a young American reporter, Jane, who becomes obsessed with her ex-fiancée’s new girlfriend, who seems too perfect to be true. What starts as a bid to recapture the past takes Jane on a wild adventure.

I wrote the book when my kids were tiny. I was exhausted and needed distraction. While the story is 100 percent fiction, it was inspired by my years of being young and single in Hanoi.

Hanoi Jane was originally released in Singapore and the UK, then republished in the US. A Vietnamese-language edition came out a few years back. I was really happy to get some local readers.

Many people associate Hanoi Jane with the actress and activist Jane Fonda and her 1972 visit to Hanoi. How have you dealt with the Jane Fonda connection?

The book’s cover makes it obvious that it’s light entertainment, not biography.

Because of the Vietnam focus, your work has a natural audience of people who either live or have lived in Vietnam, and people who’ve got some other connection to the country. How difficult is it to attract readers who don’t have the same connection?

I’d guess that many of my readers have some connection to Asia, or at least like to travel. For Hanoi Jane, most readers are women. But I’ve also gotten emails from guys saying they found it hilarious. I read fiction set in places I’ve never been and suspect others do to.

Your recent book of short stories, What You Don’t Know, focuses on the crime genre. What interests you so much about this genre?

I’ve always been fascinated by what motivates people, especially when their actions seem illogical. The tag line of What You Don’t Know is “Tales of obsession, murder and mystery set in Southeast Asia”. The 10 stories in the collection feature characters motivated by dark emotions like jealousy, greed, lust, fear and revenge. It came out last summer and is getting good reviews on Amazon.

The protagonist in your latest novel, Saigon Dark, is American-Vietnamese. What problems did you encounter trying to understand the mind and outlook of a Viet Kieu living in Vietnam?

This book came out from Crimewave Press in mid-November. The story follows Lily Vo, a Vietnamese-American pediatrician, recently divorced and living in Ho Chi Minh City. When tragedy strikes, Lily is very isolated and makes a choice that requires her to keep a dark secret. I made Lily Viet Kieu to emphasize her isolation — she’s always on edge, feeling like she should understand things she doesn’t.

I have a lot of Viet Kieu friends and a Viet Kieu husband. But good fictional characters are like people — you can generalise to a point but they’re all different, with their own strengths, flaws and problems. Lily’s my favorite character so far — a strong and in many ways admirable woman trying to cover up a major crime.

What makes Vietnam and Southeast Asia such a good setting for your work?

A story requires conflict — good versus bad, right against wrong — and there are more moral grey areas in developing countries.

If you were to discover photocopied versions of your work on sale in the tourist areas of Hanoi or Saigon, how would you react?

As well as writing fiction for adults, I write and illustrate a line of kids’ books about Vietnam (stickyriceworld.com). I’ve found rip-offs of my illustrations — modified with dodgy slogans in an ugly font. If you’re going to steal from me, don’t add insult to injury!

Reposted from the Word Vietnam