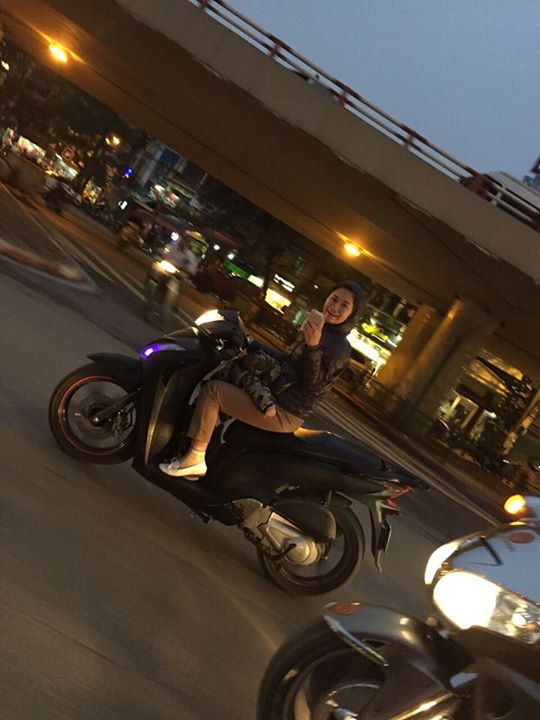 On a recent visit to Vietnam, football star David Beckham snapped a photo of a bareheaded woman trying to snap a shot of him while driving a scooter with a baby between her feet. She’s since been charged with breaking Vietnam’s traffic laws.

Vietnam’s netizens have responded to the photo with outrage, accusing the pictured lady of embarrassing Vietnam. But the sad truth is that even though wearing motorbike helmets became mandatory by law seven years ago, many people – especially in Vietnam’s capital and so-called “cultural heart”, Hanoi – don’t wear them. Even worse, many of those adults who do wear helmets to avoid police fines don’t bother to put them on their kids, since a legal loophole prevents police from fining non-helmet-wearers aged under 14. Hence, Vietnam’s most vulnerable citizens are the most likely to be among the 14,000 people who die on its roads each year.

Anyone who knows Vietnam well is probably wondering what charges this lady will face. Everything she’s doing is done daily by thousands of drivers all over Vietnam. Talking on the phone, or texting on your motorbike as you drive? All the time. Carrying a small baby between your legs? Infants are often propped up to stand on the moving bike’s seat. This woman’s transgressions could have been far, far worse. Think five people on the bike, or a small fridge strapped to the back. Unlike many guys on the road at night, she’s probably not drunk. She’s ignorant all right, but she has company.

So far, Mr. Beckham’s snapshot has garnered 18,000 comments on Facebook. As we approach the Year of the Goat, let’s hope that this photo results in more concrete changes than just the arrest of one silly scapegoat.